My father has challenged me to write in my blog everyday for 60 days..I was (and still am) a bit nervous about it. Writing is something I have always found joy in doing..but it is also a task that drains me..it requires a great deal of thought as well as time..the level of concentration it requires transforms me into an extreme introvert. I dont like to write about things that are pointless or shallow; for me to be able to “scribble things to life” (as i like to call it) I have to be passionate about the subject, and with a 5 year old running around and a 7 month old demanding my time constantly, as any of you who are raising or have raised children know, it can be pretty stinkin hard to find passion even for your husband, let alone for something to blog about. How am I supposed to work something, that asks so much of me, into my daily schedule without compromising it..When I voiced these concerns to my father..he simply said, “it’ll come to you”..and.. Like always, my father’s advice has, thus far, been right.

I was talking to a friend of mine today, when she told me an odd story..thankfully she shared this with me, because until she did, I had no idea what I was going to write about today. She told me about a letter she received. The letter was from a person that she has not spoken to in quite some time…it was from a guy who is now in prison. In the letter he asked her to please call his parents..he wanted her to tell them how sorry he was and that he loved them..he wanted her to ask his mom to please come and see him. My friend can be somewhat shy at times and she told me she was nervous about calling them. My advice to her was that she should do it. The next text I sent her read..thats sad that they havent gone and seen him..shame on them. No matter what your kids do you dont give up on them. If Rory was in prison for murdering someone i would still love him…as I pressed the send button..I knew what I would write about today.

When I look down and see the beautiful face of my son, I forget that one day from his smooth little chin whiskers will grow..as Jonathan hangs Trinitee’s towel up to dry after giving her a bath, Im sure that the last thing he thinks about is how this nights completed bathtime is just one more check on a short list…before he knows it daddy’s little girl wont be so little anymore. No matter how much we beg for the clock to stop and for time to exclude our children it cannot be done. The little hands that reach out for me..the tiny hands that hold onto mine so tightly..this lays upon my soul such sadness to say..but, one day these sweet little hands could become the hands that take a person’s life. If this dark scenario were to one day become reality, my love would not lessen. No amount of evil or wrongdoing done by my child could ever cause me to deny him..I would never fail to be there when he reached out for me..no matter the amount of sinful blood dripping from his hands..I would never let them go.

For almost a decade, I was the constant tears that flooded my mother’s heart. I was the pain that cut into my father’s soul. I was the constant prayer on their lips. My parents never gave up me..they never stopped praying for me. They never gave up on the promise they were given by God. Ive failed my parents more times than I can count..but to them, I have never been a failure..and in the back of my mind, I always knew that. If any parents are reading this who have children that are running from God..dont ever give up on them. Let their name be the constant prayer on your lips..regardless of the evil that has them blinded..dont ever stop being there when they reach out for you. No matter the distance into a pit of despair that they have fallen..never let their hand go. The progress and the change that the Lord has made in me shows the power a mother’s prayer can hold.

If the love of a mother and father can be so unconditional…think about the love that God has for us. If you are reading this and you realize that you are a prisoner trapped in the despair of your own guilt and self hatred..just know..there is no distance that one can travel to that God cannot reach. There is no amount of sin that God cannot cleanse. Even if you are unsure of who God is..in written words or spoken words write him a letter..tell him that you are sorry..tell him you love him (or that you want someone like him to love)..and if you ask him to come and see you(or for him to help you understand who he is)..i promise that he will. The darkest most disgusting crimes will not stop God from answering your letter..The thickest bars and the highest razor wire cant stop the love that God has for you.

I have loved you with an everlasting love; I have drawn you with unfailing kindness. – Jeremiah 31:3 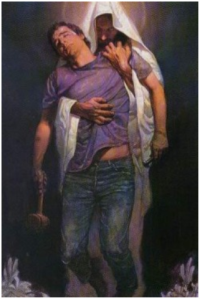 To begin this entry I am going to share a very private journal entry from my past. It is from a time in my life that I am not proud of…a period of somber darkness. The date I wrote this was December 18, 2008.

What do you do when you feel as though I do? Heartbeats stop all together. The severity of this situation has consumed me entirely. I am a mess, truly damned beyond return. My world is nothing but a crumbling Atlantis. The never-ending fiery arrows of hate and worthlessness have maimed my being beyond repair. I will never again be worthy. Oh! how I pray to be still worthy. At what moment in this whirlwind of happenings, that i call my life, did i wave a solemn farewell to my Lord? Does He remember my face? Is my name still moist upon his lips? Or has he cast me aside like the unwanted trash that i have allowed myself to become… The tides of survival have washed my sand castles of hope into oblivion. The true disease of my well-being is something that my pen cannot breathe life into. But still – I mark into this book a stamp of my current mind.

I have composed this mortal symphony of waste, and now in this mournful requiem i must reside.

When I opened my old journal the other day, to say that the things i read were shocking would be an understatement. The declarations of despair held between the leather bindings of that book is my life – or better said – was my life.

The soul who sins shall die…the wickedness of the wicked shall be upon himself. – Ezekiel 18:20

It is hard for me to pinpoint when I decided to walk away from my faith. Through the years i have tried to figure out what happened to me – what caused the drastic change…i have always failed to find the answer. It definitely was not like the stereotypical scenario that many think of – a child stands in the candy isle, a pack of sweetarts clutched tight in a shaky hand..the child has no money..but no one is watching. On one shoulder a little man in a red cape dances around – above the other shoulder floats a beautiful blonde lady wearing white. It definitely wasnt like that. I was raised..or better said..i was born into loving Jesus. The example shown to me by my parents empowered me to have a deep relationship with Christ at a very young age. I loved the Lord – He was the joy of my heart as a child. The dark force whose one goal is to drag you and me to hell (aka satan) was far too smart to try and derail my salvation overnight – it was a gradual descent. It was a slow deception that led me into the bleak wasteland that nearly became my grave. I remember on multiple occasions crying out to God..begging him to allow me to just go back – to find myself – to find that little girl who had once loved him so. Sin had blinded me to the point that I, with great sorrow, accepted my self-imposed sentence of irreversible damnation. I was dead. Emotional death, mental death, spiritual death, the only one that the grace of Jesus allowed me to dodge was physical death. Even though there were many times I pleaded with God to end me – to snuff me out. Thankyou my most merciful Savior! He had other plans for me.

My rambling mind is far too long-winded for me to finish this tonight. I will continue tomorrow, Lord willing…until then I will leave you with this:

In my distress I called to the Lord,
and he answered me.
From deep in the realm of the dead I called for help,
and you listened to my cry.
You hurled me into the depths,
into the very heart of the seas,
and the currents swirled about me;
all your waves and breakers
swept over me.
I said, ‘I have been banished
from your sight;
yet I will look again
toward your holy temple.’
The engulfing waters threatened me,
the deep surrounded me;
seaweed was wrapped around my head.
To the roots of the mountains I sank down;
the earth beneath barred me in forever.
But you, Lord my God,
brought my life up from the pit. – Jonah 2

things that matter to me

Finding God Fluoride is bad for you God is Love homeschool stuff my take on proverbs my testimony my thoughts on true christianity on when God grew skin redemption spiritual warfare The bible is smart the praying parent thinking free To Train Up A Child Uncategorized vaccination what's wrong with this world!

I will speak for those who cannot. Abolish Human Abortion.

A crochet hook, some yarn and a little creativity. Dog hair optional.

speak for those who have no voice

KT and the Squid

Exploring things crafty, crochet, and beyond

All about the dangers of vaccinations

Serving and Learning Together since 2013

A Site for Learning, Sharing and Support for Muslim Families

The facts about vaccine safety your government won't give you